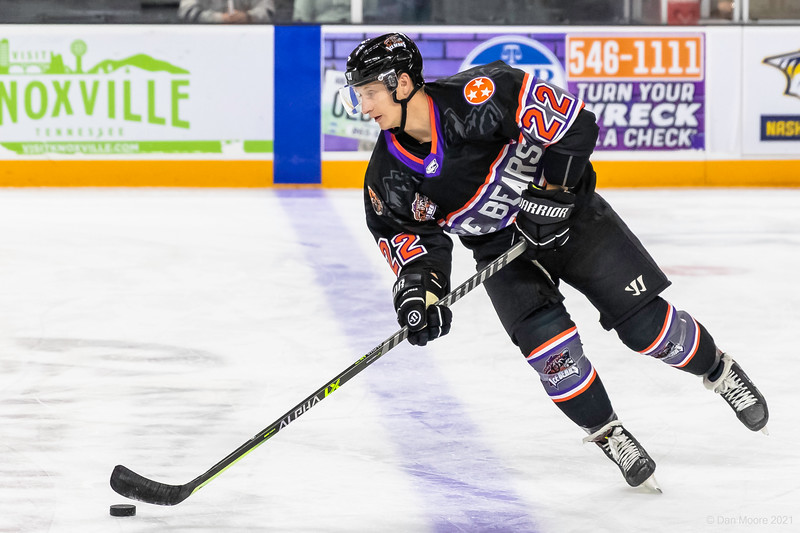 Brady Fleurent and Stepan Timofeyev each scored twice and the Knoxville Ice Bears rallied for a 5-3 win over the Fayetteville Marksmen at the Knoxville Civic Coliseum Friday night.

The Ice Bears (23-3-3) won their seventh game when trailing in the third period this season. Knoxville also extended its point streak to eleven games and is 10-0-1 in that stretch.

Fleurent broke a 3-3 tie with a one-timer right in front of the net. Joey Strada fed the puck behind the net to Jared Nash, who slipped it out in front of the crease where Fleurent was waiting for it. Fleurent punched the puck past Matt Williams to put Knoxville ahead for good.

Fleurent scored just 34 seconds into the game to put Knoxville in front early. Razmuz Waxin-Engback entered the zone on the left wing and centered the puck to Fleurent, who found space in the right circle before putting the puck on net in his first game since returning to Knoxville from the ECHL.

Fayetteville nearly tied the game twice before the first intermission. The first was when a shot from the blue line found the left post and stayed out. The second was when a scrum in front of the crease resulted in Bryce Ferrell having an open net to shoot on before Jason Price dove in front of the shot to block the puck with 12 seconds remaining in the period.

The Marksmen took the lead early in the second when Matt McNair scored on a wrist shot from the right circle at 1:20 and Drake Glover poked in a loose puck off the goal line just over three minutes later.

Timofeyev scored from the left circle just 1:25 into the third to tie the game for the Ice Bears. Strada fed him the puck off the left wall and Timofeyev slipped it behind Williams with a quick release.

Timofeyev notched his second of the night when he carried the puck through the left circle on a 2-on-1. He skated in front of the crease and lifted a backhand over Williams at 12:02. Timofeyev was playing in his first game back after a three-week stint on the IR.

Following Fleurent’s go-ahead goal, J.B. Baker added an empty netter with 40 seconds remaining to seal the game. Baker now has an 11-game point streak with 14 points in that stretch. Moyse made 26 saves for Knoxville. Williams finished with 17 stops.

Knoxville will remain home to host Vermilion County on Saturday night. Fayetteville will continue its road trip and head to Pelham to face Birmingham on Saturday.