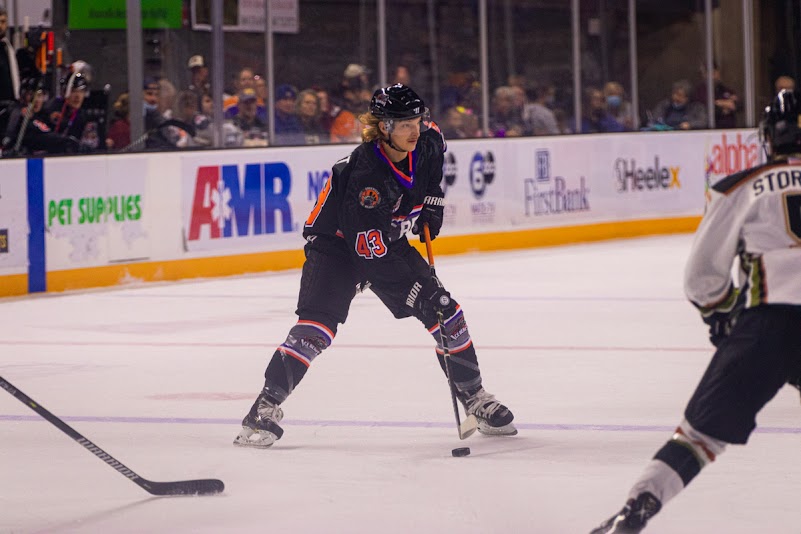 Andrew Bellant scored the eventual game-winner in the third period, Jimmy Poreda made 29 saves and the Knoxville Ice Bears defeated the Evansville Thunderbolts 4-1 at the Ford Center in Indiana Friday night.

Anthony McVeigh, Dino Balsamo and J.B. Baker also scored for the Ice Bears (6-2-1), who are 2-1-1 on their current road stretch. The Thunderbolts (6-3-0) have now dropped two straight.

Bellant broke the puck out of the zone to force a 2-on-1. He skated into the right circle and zipped a wrist shot over the blocker of Brian Billett at 7:47 for his third goal of the season. All three of Bellant’s goals have been game-winners.

McVeigh scored at 4:28 of the first to put Knoxville ahead. Sam Turner shot the puck from the right point and McVeigh redirected it from the slot to split Billett’s pads for McVeigh’s third goal in his last four games.

Evansville tied the score when Scott Kirton found the puck for a rebound at 4:17 of the second. Austin Plevy shot the puck from outside the right circle. Poreda stopped the initial try with traffic in front of the net and the puck sat on the left side of the crease where Kirton skated in and cleaned up the rebound.

Balsamo and Baker each scored empty net goals in the final two minutes to cap off the scoring.

Both teams went 0-of-2 on the power play and Billett finished with 21 saves on 23 shots against for the Thunderbolts.