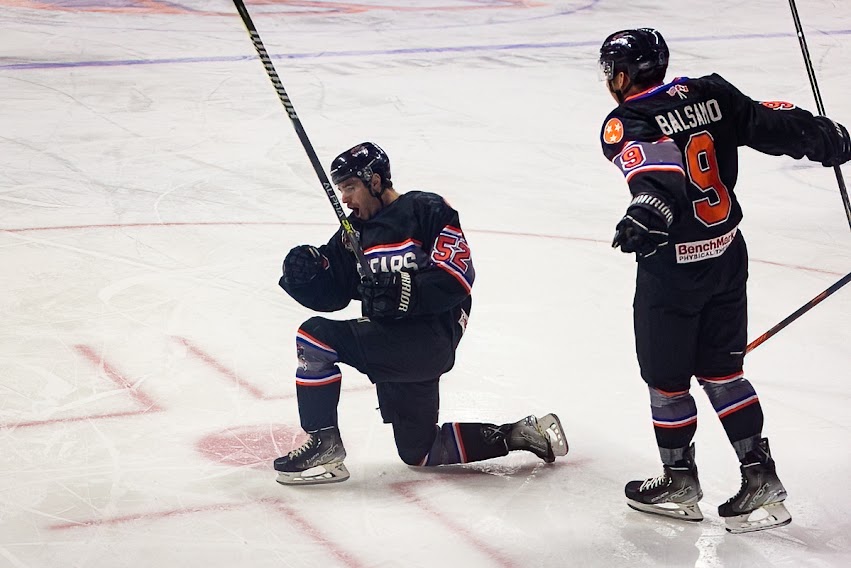 Brady Fleurent put Knoxville ahead for good with three and a half minutes remaining and the Ice Bears rallied to beat the Birmingham Bulls 6-4 at the Pelham Civic Complex Saturday night.

The Ice Bears (39-9-4) have won seven straight and move into sole possession of first place in the SPHL standings with Huntsville’s loss to Roanoke. The Bulls (15-30-6) dropped their second straight. Knoxville finishes the season 7-1 against Birmingham.

Fleurent gained position in front of the crease on the power play and put back a rebound at 16:26 of the third period to break a 4-4 tie. Stepan Timofeyev’s shot from the left circle hit Hayden Stewart’s pad and Fleurent corralled it before throwing it into the net.

Anthony McVeigh scored early for Knoxville when he collected a rebound in the slot and put it back on net. Jared Nash’s shot from the left circle bounced off of Stewart and out in front. McVeigh collected the puck and fired a wrist shot past Stewart for his 19th of the season at 2:48.

Dino Balsamo tipped a shot from the left side and bounced the puck behind Stewart at 13:35. Cale List shot from the top of the left circle and Balsamo got his stick on it through traffic to tie the game.

Birmingham retook the lead just over a minute later when C.J. Hayes flipped a backhand over Poreda’s blocker to give the Bulls a 3-2 edge at the first intermission. The Ice Bears nearly tied the game before the break several times, but Stewart made a series of quality saves down the stretch, including against Balsamo on a breakaway and denying Nick Leitner on an unscreened look from the right circle.

Nash tied the game for Knoxville at 4:57 of the second with a redirect from in front of the net. Jason Price ripped a slap shot from the blue line and Nash tipped it in for his 9th goal of the year.

Jake Pappalardo carried the puck across the zone and slipped the puck by a screened Poreda to give the Bulls the lead at 8:32 of the third.

Timofeyev scored from the left circle on the power play at 12:31 of the third to tie the game and to extend his current goal streak to eight games. He also scored an empty-netter with 34 seconds remaining. He has 11 goals during the streak.

Poreda finished with 31 saves for Knoxville. Stewart made 31 stops as well for the Bulls. Knoxville finished 3-of-6 on the power play. The Bulls went 0-of-4.

Knoxville will continue its four-game road trip with a pair of games at Roanoke next Friday and Saturday. Ice Bears fans can view the games at Union Place Bar & Grill for the official road game watch party.