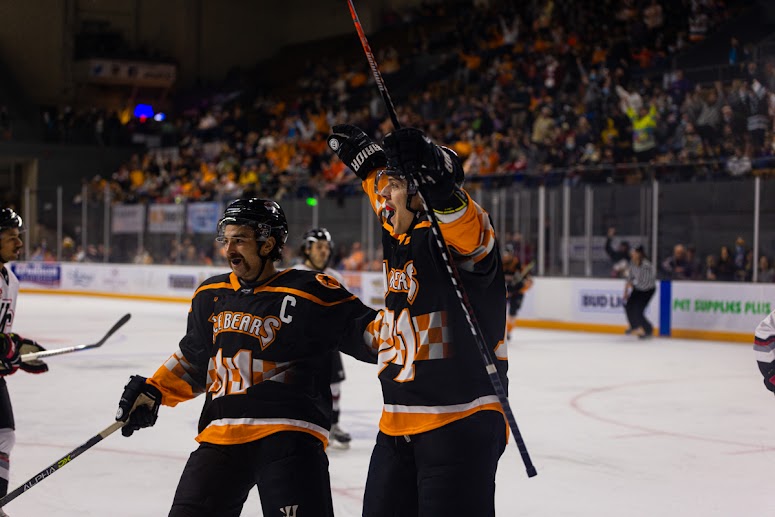 Jimmy Poreda made 36 saves for his first shutout, Stefan Brucato had two goals and an assist and the Knoxville Ice Bears beat the Birmingham Bulls 5-0 at the Civic Coliseum Wednesday night. The Ice Bears (10-2-1) have now won five straight and have scored 35 goals in their last six games. The Bulls (2-7-4) have lost three straight.

Knoxville opened the scoring when J.B. Baker found the net from the slot at 7:41 of the first. Brucato carried the puck into the left circle and centered it to Baker, who turned it on net past Hayden Stewart for his fourth goal of the season.

Brucato extended Knoxville’s lead when he cleaned up a loose puck by the crease at 11:01. Razmuz Waxin-Engback made it 3-0 before the end of the first period. Stepan Timofeyev fired the puck towards the net from the left wall. Baker redirected it from in front across the crease to Waxin-Engback on the opposite side for the Swede’s fourth of the year.

Brucato scored his second of the night with a tight-angle shot from the left end line that snuck behind Stewart and into the net at 4:18 of the second. Andrew Bellant made it 5-0 off a shorthanded breakaway at 15:38.

Stewart finished with 27 saves for Birmingham. Knoxville went 2-of-3 on the power play and 5-of-5 on the penalty kill.

Knoxville will stay home and face Birmingham again on Friday night. The Bulls head to Huntsville to face the Havoc on Thursday before returning to Knoxville.