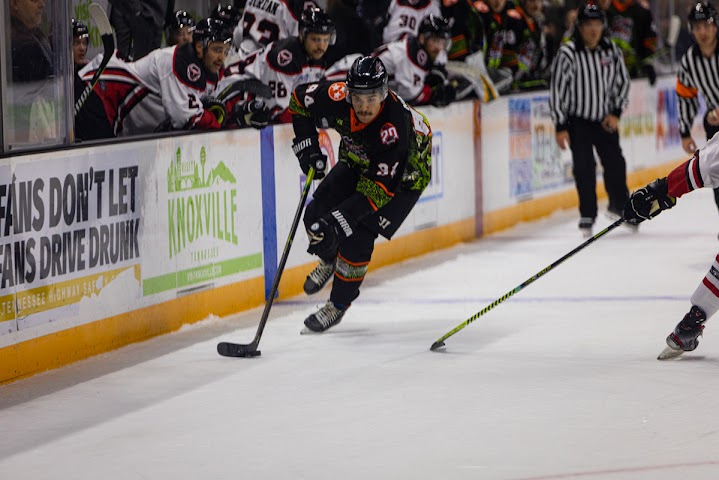 The Ice Bears (18-3-2) have won five straight for the second time this season. The shutout was Knoxville’s fifth of the year. It was Moyse’s second win in as many starts in an Ice Bears uniform. He made 41 saves in Thursday’s win over Huntsville before being loaned to Cincinnati in the ECHL and returning Saturday afternoon.

The night began with a tribute to Knoxville defenseman Jason Price, who played in his 600th career SPHL game. He’s the first player in league history to reach the milestone and is also the league’s all-time leader in points by a blue liner.

Both teams had chances in the first period, but the game remained scoreless through 20 minutes. Each team had a 5-on-3 opportunity, but each team’s penalty kill kept the scoreboard clean.

Jared Nash opened up the scoring in the second period when he pushed the puck past Sean Kuhn from in front of the crease at 2:49 on the power play. As Knoxville moved the puck around the perimeter, Alex Pommerville had it on his stick in the left circle. Pommerville fired a straight-line pass to Nash in front, and Nash put it behind Kuhn for his first career goal.

Pensacola nearly tied the game moments later, but a shot from the high slot hit the post and stayed out. Moyse thwarted a two-on-one at the halfway point of the period and then stopped a quick shot from the left circle with a glove save in the final minute to keep Knoxville in front at the second intermission.

Joey Strada scored his first as an Ice Bear to give Knoxville some insurance in the third period. Anthony McVeigh worked the puck from the half wall to Jeff Upright behind the net. Eppright slipped the puck out to the near side of the crease where Strada swept in and pushed the puck past Kuhn’s left pad at 6:35.

J.B. Baker scored on an empty net with two seconds remaining for his 11th goal of the year. Kuhn finished with 28 saves for the Ice Flyers (12-9-5).

Knoxville will next be in action Saturday night at home against Vermilion County. Pensacola is off until Friday when it hosts Birmingham.