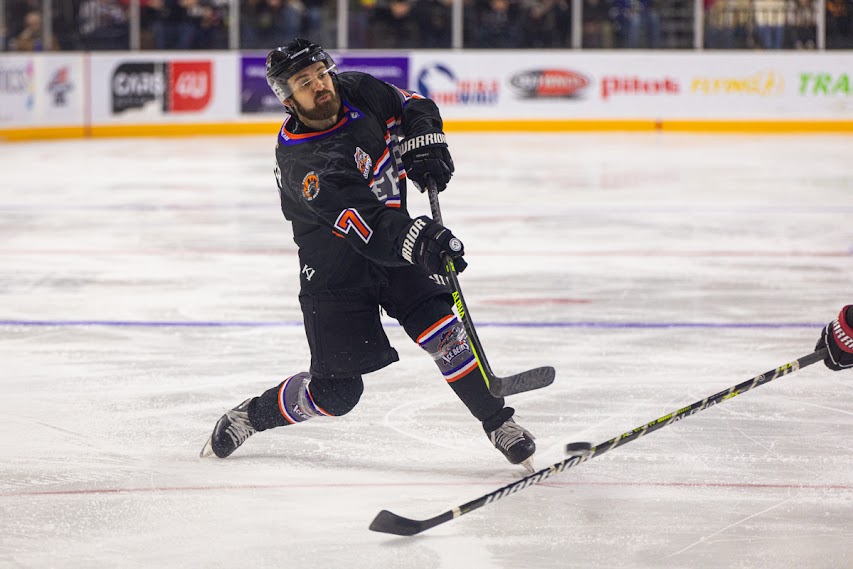 Cody Rodgers scored the only goal of the first period with a low shot from he blue line at 16:47. Shortly after a Knoxville penalty had expired, Rodgers wound up from up top and slipped the puck between Stead’s left pad and the short side post.

Knoxville answered quickly in the second period when Jason Price scored off a blast from the blue line at 1:09. With the Ice Bears on the power play, Dino Balsamo fed Price at the line and his slap shot beat a screened Michael Stiliadis.

Anthony McVeigh was awarded a penalty shot after being tripped from behind on a breakaway. McVeigh weaved towards the left hash and beat Stiliadis with a wrist shot to give Knoxville the lead at 3:44.

After Knoxville broke out of its own zone from a flurry of chances for the Mayhem, Waxin-Engback banked the puck up the left wing to Balsamo, who had snuck behind everyone with Andrew Bellant for a two-man breakaway. The two former Adrian College teammates executed a give-and-go that ended with Balsamo finding the net for his 20th goal of the season.

Jared Nash won a face off in the right circle and fed the puck back to Brady Fleurent. Fleurent connected with Baker, who was alone in front of the crease, giving him time to turn and put the puck past Stiliadis at 2:55 of the third.

Waxin-Engback stole the puck from Rodgers at the Macon blue line and carried it down into the slot before putting it on net for a shorthanded goal at 16:23. Baker scored his second of the night just over a minute later with a wrist shot from the right circle to cap off the scoring.

Knoxville returns home to host Fayetteville on Saturday and Sunday. Macon will host the Marksmen on Friday.