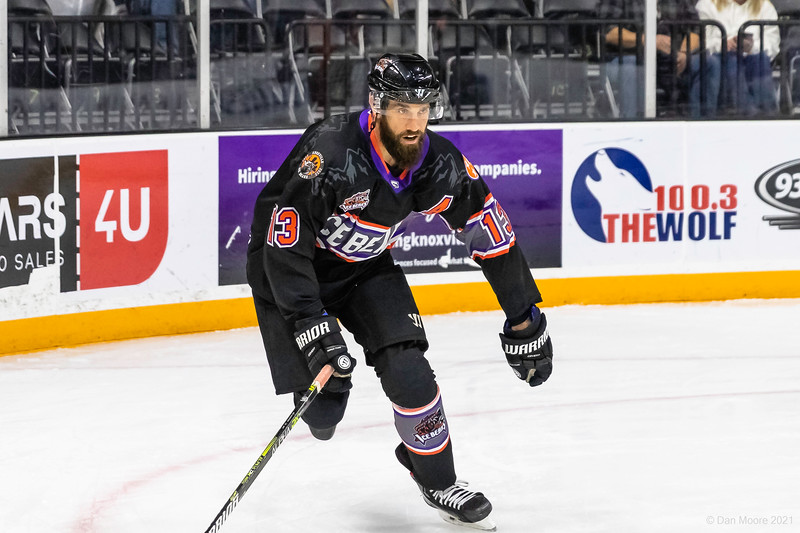 Peoria scored two goals less than three minutes apart late in the third period and the Knoxville Ice Bears fell to the Rivermen 5-4 Saturday night at the Peoria Civic Center.

Knoxville (13-3-2) fell for the second straight game in which it had a two-goal lead. The Rivermen (7-3-4) now have points in eight consecutive games.

Jason Price scored his second goal of the season from the left corner. He evaded a trip while carrying the puck through the left circle, regained his footing and fired the puck past Eric Levine at 6:06 of the first. Anthony McVeigh tapped in a rebound with less than a second remaining to give Knoxville a 2-0 edge at the first intermission.

J.M. Piotrowski scored to cut the deficit in half at 9:17 of the second. Stepan Timofeyev gave Knoxville a 3-1 lead with a one-timer from in front of the crease at 12:53.

Piotrowski completed the hat trick with two more goals less than two minutes apart to tie the game. The third goal resulted in the end of the night for Kristian Stead, who gave up three goals on 17 shots. He was replaced by Beandan Colgan, who was called up from the FPHL earlier this week. Colgan made 12 saves on 14 shots in his SPHL debut.

Dino Balsamo scored his ninth goal of the season from the side of the crease after Andrew Bellant fed him the puck from the right circle. Balsamo crashed the crease and directed the puck past Levine to give the Ice Bears the lead again before the end of the second period.

Alec Hagaman tied the game for Peoria with a wrist shot from the slot at 13:49 of the third. Paul-Antoine Deslauriers scored the game winner at 15:59 to put the Rivermen ahead for good.

Knoxville had a late power play opportunity in an attempt to force overtime, but Levine gloved Balsamo’s close-range backdoor try with 1:11 remaining and the Ice Bears failed to get another chance.

Knoxville returns home for a two-game weekend against Macon next Friday and Saturday. Peoria visits Quad City on Friday.