Ice Bears fall to Bolts 4-3 on the road 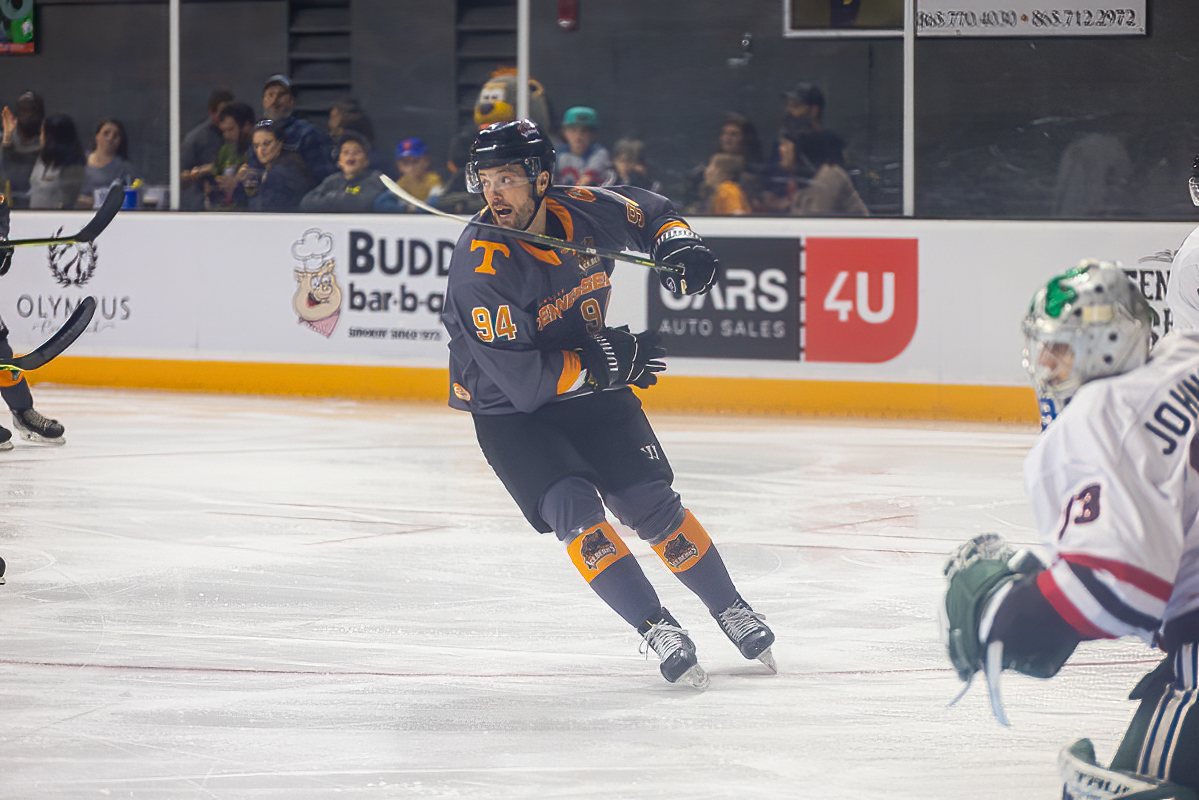 Matthew Barron scored at 4:15 of the third to keep Evansville out in front for good and the Knoxville Ice Bears fell to the Thunderbolts 4-3 at the Ford Center Saturday night.

Brett Ouderkirk had two goals and an assist and Justin MacDonald had three assists for Knoxville.

After a turnover in the Knoxville zone resulted in a two-on-one, Aaron Huffnagle found Barron alone in front of the net and he buried it past Tom Aubrun to make it 4-2 early in the final frame.

Knoxville had two power play opportunities in the final ten minutes of regulation, but couldn’t get the puck past Zane Steeves, who finished with 25 saves.

Ouderkirk opened the scoring for Knoxville when his shot from the left point rebounded off an Evansville skater and bounced past Steeves into the net at 16:59 of the first. MacDonald fed the puck to Ouderkirk up top and his shot from the point hit Steeves’ blocker before it bounced off someone else and slipped by the goalie.

Fredrik Wink tied the game for Evansville with 37 seconds left in the period. Hayden Hulton pushed the puck back to the left point for Kristaps Nimanis. Nimanis’ slap shot was redirected by Wink and the puck slipped between the pads of Aubrun for Wink’s second goal of the year.

Mathieu Cloutier put the Thunderbolts back in front just 45 seconds into the second when he redirected the puck over Aubrun to make it 2-1.

Brady Fleurent finished off an odd-man rush to tie the game again at 6:07. Ouderkirk poke checked the puck to himself around an Evansville skater along the wall and fed it up the right wing to MacDonald. MacDonald created a two-on-one and slipped the puck across to Fleurent, who fired a wrist shot over Steeves’ glove for his third goal of the season.

Mike Ferraro scored on the power play at 11:31 to put the Thunderbolts in front for the third time. Tanner Butler worked it to Ferraro in the right circle and Ferraro beat Aubrun to the far side post.

Ouderkirk notched his second of the night when MacDonald won a wall battle in the corner and slid it to Ouderkirk in the right circle. Ouderkirk’s wrist shot was lifted over Steeves’ blocker and inside the far post.