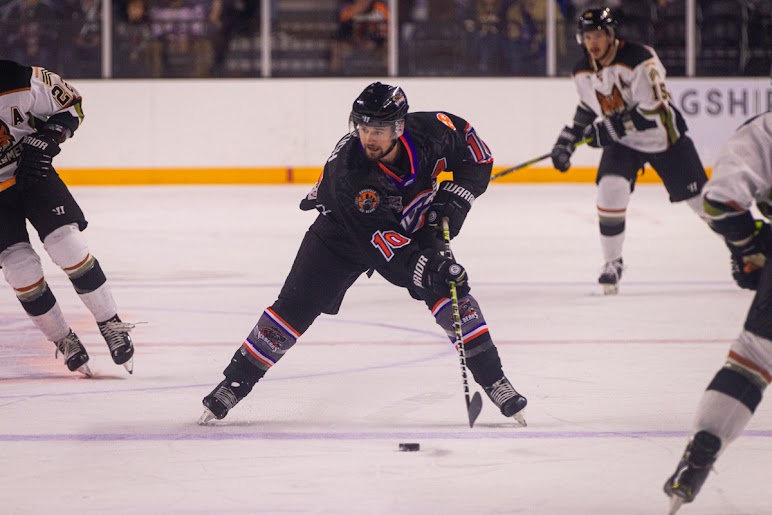 Jacob Barber scored twice in the shootout for Huntsville and the Knoxville Ice Bears fell to the Havoc 6-5 at the Von Braun Center on Wednesday night.

Anthony McVeigh had three points for Knoxville (5-2-1) as the Ice Bears lost their second straight game.

Bauer Neudecker scored the equalizer at 15:35 of the third period when he beat Jimmy Poreda five-hole from the right circle. The Havoc (9-0-0) are off to their best start in franchise history.

The Ice Bears took a 5-4 lead 1:48 into the third when Dino Balsamo scored from in front of the crease.

Knoxville nearly won it in overtime when Stepan Timofeyev dashed across the front of the crease with the puck, but his attempt was kicked away by Hunter Vorva.

After Barber’s first shootout goal, Andrew Bellant scored in the third round to tie the shootout at 1-1. Stefan Brucato had an opportunity to win it for the Ice Bears, but failed to convert. Barber scored again on his second attempt and Balsamo was stopped by Vorva to give Huntsville the win.

Huntsville struck first when the Havoc broke out of their own zone with a feed to Neudecker up the left wing resulting in a 2-on-1. Neudecker skated the puck into the left circle before feeding it across the slot to Rob Darrar. Darrar’s wrist shot beat the glove of Kristian Stead to give Huntsville a 1-0 lead at 8:19 of the first.

Stefan Brucato tied the game for Knoxville when he received the pass in the neutral zone, skated into the high slot, dangled around Nolan Kaiser and beat Vorva for his fourth goal of the season at 11:29 to keep the score even at the first intermission.

McVeigh put the Ice Bears in front just 17 seconds into the second when Jason Price led him with a pass along the left side into the circle. McVeigh skated in front of the crease and outmaneuvered Vorva for a shorthanded goal to make it 2-1.

Huntsville answered less than two minutes later when Tyler Piacentini jammed in a loose puck by the crease. The Havoc retook the lead on a penalty shot by Sy Nutkevitch at 7:52.

Razmuz Waxin-Engback tied the game on the power play at 8:44 after J.B. Baker found him in front of the crease from the left circle. Waxin-Engback flipped a backhand over Vorva off the right side of the crease for his second goal of the year. The Ice Bears took a 4-3 lead when Sam Turner sent the puck into the slot from the right point. The puck hit a Huntsville stick, bounced off another skater and landed into the net at 9:30.

Dominick Procopio tied the game just before the second intermission with a tight-angle wrist shot at 17:53. Procopio had the puck below the left circle and found a small space over Stead’s right shoulder. Stead was replaced by Poreda to start the third period. Stead finished with 11 saves. Poreda stopped 11 of 12 shots.

The Ice Bears continue a five-game road trip when they head to Evansville Friday night. The Havoc remain home to host the Pensacola Ice Flyers on Friday night.