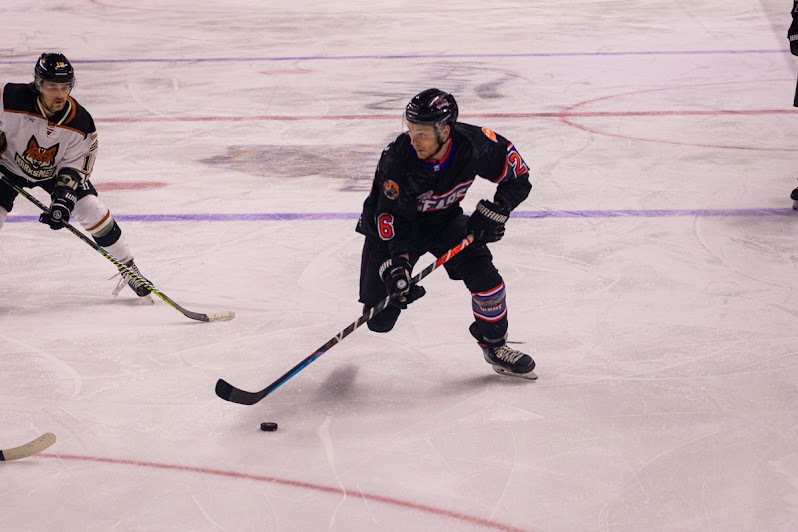 Joseph Noonan stopped all 15 shots he faced and the Peoria Rivermen rallied for a 5-4 shootout win over the Knoxville Ice Bears Friday night at the Peoria Civic Center.

The loss snaps an eight-game win streak for Knoxville (13-2-2). The Ice Bears hadn’t lost since dropping a shootout to Huntsville on Nov. 10. Peoria (6-3-4) ends a two-game skid after getting swept by Quad City last weekend.

Knoxville opened the scoring early when Jason Price made a backdoor feed from the left circle to the right side of the crease where Dino Balsamo was waiting to tap it behind Eric Levine just 1:28 into the game. Steven Leonard scored his second goal of the season at 14:48. Stepan Timofeyev carried the puck into the zone, twirled to the top of the left circle and zipped a pass across to the right side where Leonard’s wrist shot gave the Ice Bears a 2-0 lead at the first intermission.

Marcel Godbout scored from the right circle at 4:41 of the second to cut the deficit in half. Andrew Bellant extended the lead to two goals again with a backhand from the left circle at 8:33 to make it 3-1. Peoria cut Knoxville’s lead in half again less than two minutes later when Mitchell McPherson rebounded an Alec Baer shot past Kristian Stead.

Colton Fletcher stole the puck in the neutral zone, skated through the right circle and fired a sharp-angle shot that found its way into the net at 12:57 of the second and ended Levine’s night. Levine finished with nine saves on 13 shots.

Alec Hagaman scored 25 seconds before the second intermission to shorten Knoxville’s lead to 4-3. Baer scored on a one-timer from the slot off a pass from Nick Neville at the right circle to tie the game at 5:27 of the third.

Knoxville failed to convert a power play late in the third period. The Ice Bears successfully killed off the only penalty of the overtime period to force a shootout.

After a save by Stead and a goal by Stefan Brucato, Peoria scored with its next four shooters to complete the comeback. Price hit the crossbar and Andrew Bellant lost control of the puck on his attempt. Fletcher scored in the third round of the shootout.

Stead finished with 28 saves in his first loss of the season. The two teams will face off again Saturday night in Peoria.