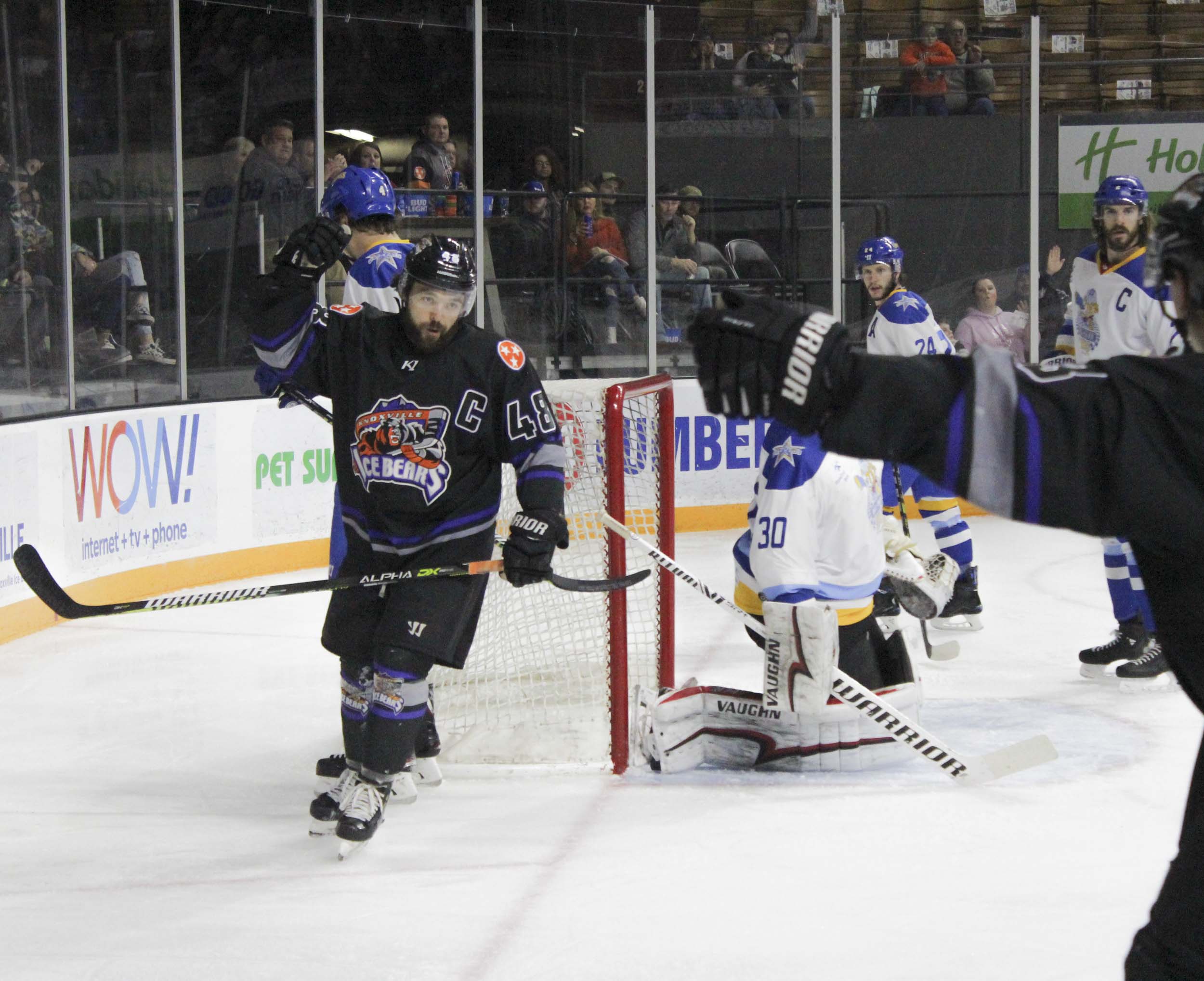 Lucas Bombardier, Scott Cuthrell, Stefan Brucato, and Gehrett Sargis all had a goal and an assist each and the Knoxville Ice Bears defeated the Roanoke Rail Yard Dawgs 5-2 on Friday at the Civic Coliseum.

The Ice Bears are 4-0-1 in their last five games. Roanoke has dropped four straight.

Knoxville scored first on a power play with Bombardier’s ninth goal of the season at 5:14 of the first. Stefan Brucato fielded a pass from Cuthrell and skated behind the net before slipping it out to Bombardier right by the crease. Bombardier’s one-timer found the net to give Knoxville the lead.

The Rail Yard Dawgs responded in similar fashion when Matt ODea dished the puck from behind the net out in front to Jeff Jones for a quick strike to tie the game at 11:43.

The Ice Bears jumped ahead before the first intermission with Cuthrell’s rebound goal with 31 seconds remaining. Sargis carried the puck through the left circle and shot it low and away from Dill. The kick save bounced out to the slot to Cuthrell, who put it back behind Dill to give Knoxville a 2-1 lead.

Sargis gave Knoxville a 3-1 lead by finishing off a 2-on-1 at 14:20 of the second. Sargis fed the puck to Josh Pietrantonio in the left circle, who then slid it back to the right side of the crease. Sargis tapped the puck in past Dill for his 17th goal of the year. Brucato scored off a loss puck by the left hash at 18:01 to give the Ice Bears a three-goal edge.

Dill was replaced by Austyn Roudebush to begin the third period. Dill finished with 23 saves.

A turnover in the Roanoke end gave Knoxville a 3-on-1 with Lionel Mauron taking the puck through the right circle. Mauron’s pass set up Dwyer Tschantz with a lot of space in the slot and Tschantz buried it for a 5-1 lead.

Brad Riccardi scored at 17:20 of the third to cap off the scoring. Roudebush finished with eight saves. Cody Porter stopped 28 shots for Knoxville.

The two teams will meet again in Knoxville on Saturday.