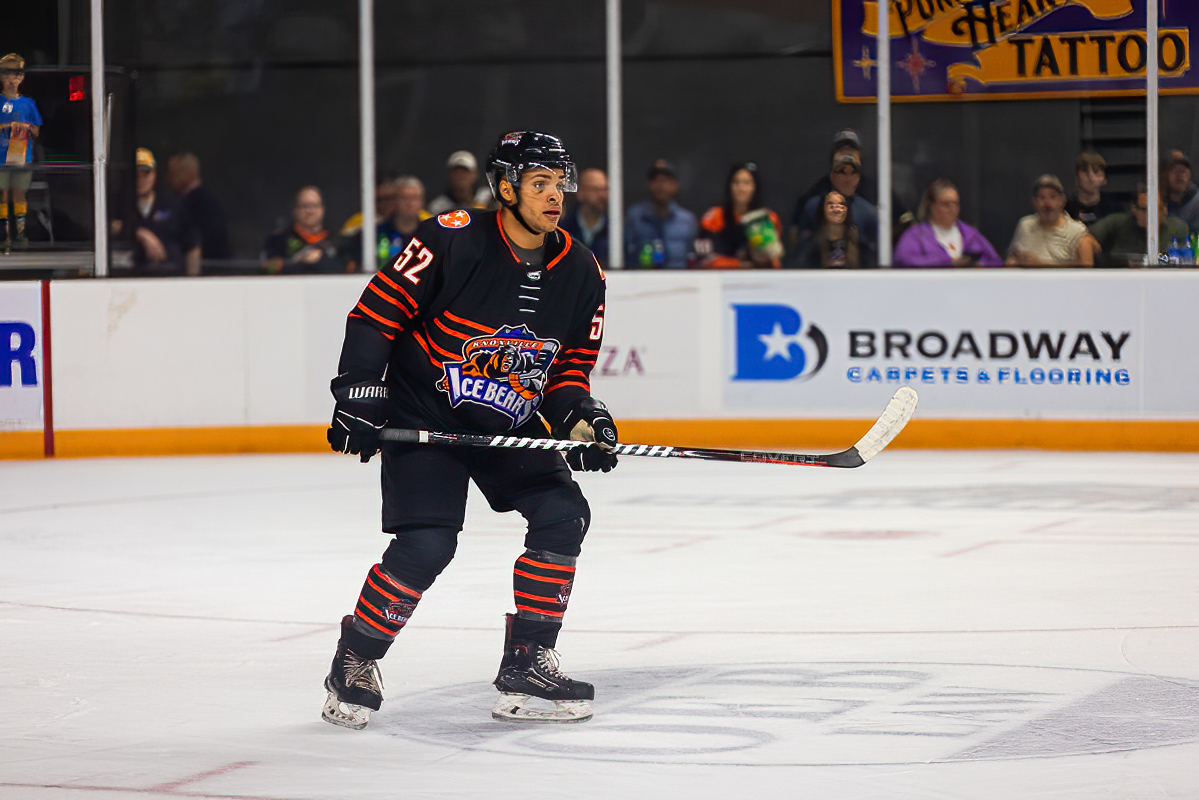 Ben Assad and Alec Hagaman scored in the shootout and the Knoxville Ice Bears fell to Peoria 4-3 at the Knoxville Civic Coliseum Friday night.

Nick Pryce scored two goals for the Ice Bears, who have dropped back-to-back games for the first time this season.

After Hagaman and Razmuz Waxin-Engback each scored in the second round of the shootout, Assad lifted the puck over Stead in the fifth round and Justin MacDonald’s shot sailed wide to give Peoria the win.

Cayden Cahill scored first for Peoria when his wrist shot found the back of the net at 2:03 of the opening period. Cahill skated through the neutral zone and found space in the left circle. Jimmy Poreda got a piece of the puck, but it slipped behind him to give the Rivermen the early advantage.

Peoria doubled its lead when Jordan Ernst scored on the power play at 1:56 of the second.

Knoxville tied the game quickly midway through the second period when MacDonald scored from in front of the crease at 7:37. Jagger Williamson saucered the puck from circle-to-circle and found Brady Fleurent on the left side. Fleurent sent it in front to MacDonald, who redirected it past Ben Churchfield for his fifth goal of the season.

Pryce scored his first pro goal when he slid the puck underneath Churchfield just over a minute later. Dino Balsamo slowed the rush in the right circle and allowed Pryce to enter through the slot. Balsamo found Pryce’s tape and the rookie buried the puck at 8:45.

Mitchell McPherson scored on the power play with

36 seconds left in the second period to give Peoria the lead back. Poreda was pulled at the second intermission and finished with 12 saves. Kristian Stead came on in relief and stopped all nine shots he faced through the third period and overtime.

Pryce put back a rebound off his backhand to tie the game at 8:59 of the third. Kyler Matthews’ shot from up top hit traffic in front and Pryce found the puck and put it behind Churchfield.

The Ice Bears had a power play opportunity late in the third period, but failed to score, leading to overtime. Knoxville had another man-advantage chance late in the extra period, but a diving save by Churchfield with seconds remaining forced the shootout.

Knoxville heads to Georgia to take on Macon Saturday night. The Rivermen conclude their road trip at Huntsville Saturday.