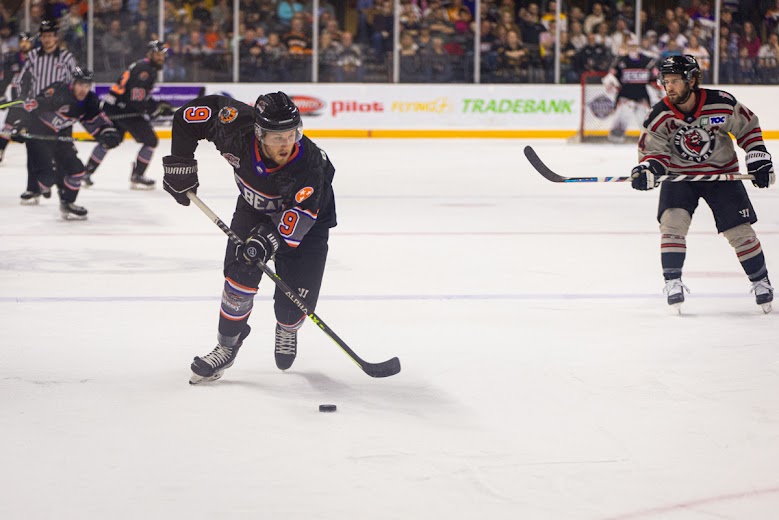 Dino Balsamo scored two goals, Tristan Cote-Cazenave made 25 saves for his first win as an Ice Bear and Knoxville cruised to a 4-1 win over the Birmingham Bulls Saturday night at the Pelham Civic Complex.

The game went scoreless through the first period despite Birmingham outshooting Knoxville 13-5. Brady Fleurent blocked a blast from the right side and Tanner Salsberry dropped in front of a shooter to eat a puck in the slot. Cote-Cazenave denied Carson Rose from the left hash right before the first period ended.

Balsamo put Knoxville ahead with a short-range goal at 4:38 of the second. Razmuz Waxin-Engback won the puck in the neutral zone and slipped it up the right wing to Andrew Bellant. Bellant waited for a Birmingham defenseman to drop to the ice before sending the puck in front of the crease to Balsamo, who tapped the puck in past Austin Lotz.

Knoxville doubled its advantage just over a minute later when Anthony McVeigh tapped the puck to Fleurent in the right side of the zone. Fleurent maneuvered around a skater, went in tight and lifted the puck over Lotz at 5:40.

Birmingham cut the deficit in half when Carson Rose scored from the right circle at 11:15.

Knoxville struck quickly in the third with a power play goal of Stepan Timofeyev to make it 3-1. Stefan Brucato collected the puck in the right corner and zipped a pass on the backdoor to Timofeyev, who pushed it past Lotz just 28 seconds into the period.

Balsamo scored his second of the night when Bellant found him with a between-the-legs pass from the high slot to the right side of the crease. Balsamo ultimately found the net for his 25th of the season. Lotz finished with 33 saves for the Bulls.

Knoxville returns home for a two-game weekend against Quad City Friday and Saturday night at the Civic Coliseum. Tickets are available by calling 525-7825 or visiting www.knoxvilleicebears.com.