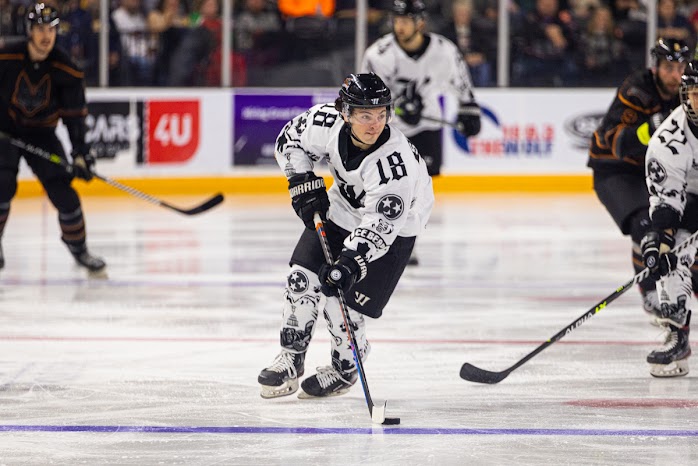 Knoxville struck first with a power play goal at 2:12 of the opening frame. Brady Fleurent sent the puck from circle-to-circle in the zone to Razmuz Waxin-Engback. Waxin-Engback fed it across the crease to Dino Balsamo on the left side and Balsamo swept in and put the puck behind Ben Churchfield for his 14th goal of the year.

Joey Strada extended Knoxville’s lead on the odd man rush when he took the puck up the right side, skated into the right circle and ripped a wrist shot top shelf at 14:10.

Anthony McVeigh extended the advantage when Strada found him in the slot to finish off a 2-on-1 at 3:47 of the second. J.B. Baker made a stretch pass to Strada through the neutral zone. Strada spun away from a defenseman and carried the puck through the left circle before finding McVeigh in the slot.

Sam Turner made it 4-0 with a blast from the right point that made its way through traffic into the net. Knoxville worked the puck around the perimeter on the power play and got the puck to Turner in space, who pinpointed a shot past Churchfield’s blocker for his sixth goal of the season.

Churchfield was benched after the second period for Joe Sheppard, who stopped 11 of 12 shots. Churchfield finished with 29 saves.

Christian Faggas scored on a slap shot from the blue line to spoil the shutout with 1:35 remaining. Jared Nash scored on an odd man rush from the right circle to cap off the scoring for Knoxville with 15 seconds left.

The two teams will meet again next Friday in Danville when the Ice Bears begin a three-game road trip to Illinois.