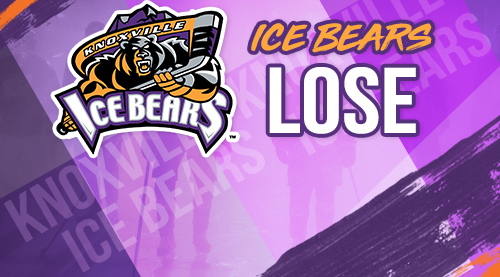 With a loose puck sliding through the open slot in the third period, Joe Murdaca dove out of his crease to poke the puck away from an oncoming attacker. Jeff Jones picked up the loose puck and put it past Murdaca for a shorthanded goal at 14:05 to give the Rail Yard Dawgs a 5-4 lead they wouldn’t relinquish.

Bobby Watson took the puck down the left wing off a blocked shot and skated through the left circle before sending a laser over Murdaca to give Roanoke a two-goal advantage at 17:04.

Jacob Benson tied the game early in the third period for the Ice Bears after carrying the puck from his own end and lifted a wrister past Ian Sylves at 1:38 of the third.

Mac Jansen converted Roanoke’s first power play when he found some space in front of the crease and was fed the puck by Jeff Jones for a short-range one-timer that made its way past Hayden Stewart’s glove at 9:04 of the opening period.

Knoxville evened the score less than two minutes later after Brady Fleurent made a move to carry the puck through the left circle. Fleurent drew Sylves out of his crease and fed the puck across the slot where Jacob Benson put it on the open net from the right circle at 10:55.

Roanoke took the lead into the first period after Brad Riccardi redirected Kyle Gonzalez’s shot from the point, causing the puck to jump over Stewart’s shoulder at 14:51.

The Rail Yard Dawgs extended the lead to 3-1 when Colton Wolter scored from the right side of the crease at 1:42 of the second.

Knoxville erased the deficit with a power-play goal from Anthony McVeigh at 4:02 and a goal by Scott Cuthrell at 6:17.

Roanoke regained the lead when Jones put a rebound back on net from the left side that deflected over a diving Stewart. Stewart was subsequently pulled in favor of Murdaca. Stewart finished with 20 saves. Murdaca stopped five of seven shots.

C.J. Stubbs added an empty-net goal for Roanoke to cap the scoring.

Knoxville hits the road and visits Fayetteville Saturday night. Roanoke returns home for its third game in as many days against Birmingham.