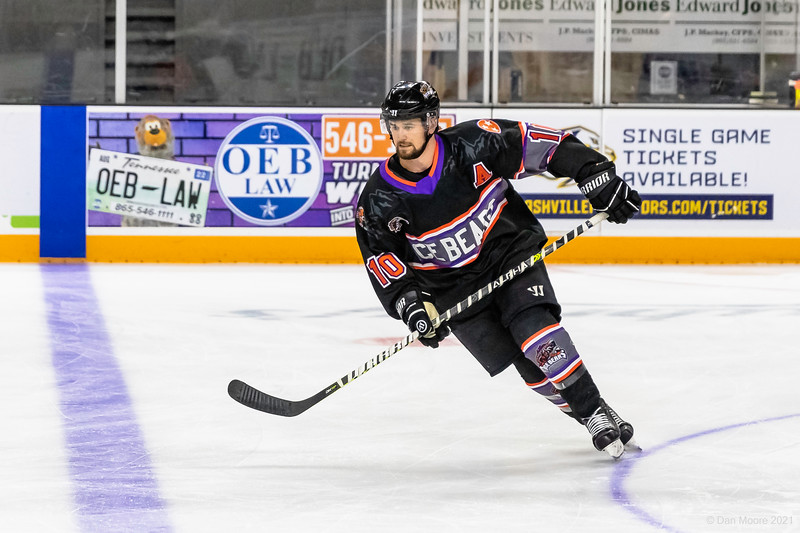 Anthony McVeigh scored the go-ahead goal at 8:58 of the third period, Evan Moyse made 41 saves and the Knoxville Ice Bears defeated the Huntsville Havoc 4-2 at the Von Braun Center in Alabama on Thursday night.

McVeigh put Knoxville ahead to stay when Kasey Kulczycki flipped the puck to him in the slot. McVeigh’s snapshot beat Hunter Vorva’s glove for his ninth goal of the season.

Huntsville had an opportunity to tie the game with a late power play, but Moyse made several stops to keep Knoxville in front. After Rob Darrar’s attempt from the right circle was stopped by Moyse, J.B. Baker picked up the rebound and fired it into the empty net to cap off the scoring with 37 seconds remaining.

Christian Faggas scored first for the Havoc when Sy Nutkevitch held the puck at the right point and fed a cross-ice pass to Faggas at the top of the left circle. Faggas lifted a wrist shot over Evan Moyse to put Huntsville ahead at 15:48 of the first.

Moyse kept Knoxville in it with a handful of saves in the early stages of the second period. He stopped Mathieu Newcomb at point blank range on the short side of the crease and denied him again moments later on a two-on-one.

The Ice Bears tied the game with Kyler Matthews notching his first of the year at 9:29 of the second. Joey Strada carried the puck into the zone down the right side and dropped it back to the top of the circle to Anthony McVeigh. McVeigh tapped it into the high slot and Matthews belted a one-timer past Hunter Vorva.

Knoxville took the lead on the power play just over three minutes later. Stefan Brucato received the puck behind the net from Razmuz Waxin-Engback, circled out in front and slipped the puck behind Vorva for his 11th goal of the season. Vorva finished with 30 saves.

After McVeigh nearly gave the Ice Bears a two-goal lead early in the third with a wrist shot that hit the right post, Robbie Fisher put the puck past Moyse to tie the game before McVeigh’s game-winner on the power play.

Knoxville returns home to face the Pensacola Ice Flyers on Friday and Saturday. Both games will begin at 6 p.m. at the Civic Coliseum. Huntsville hits the road to take on Roanoke Friday night.