McVeigh tabbed as SPHL Player of the Week 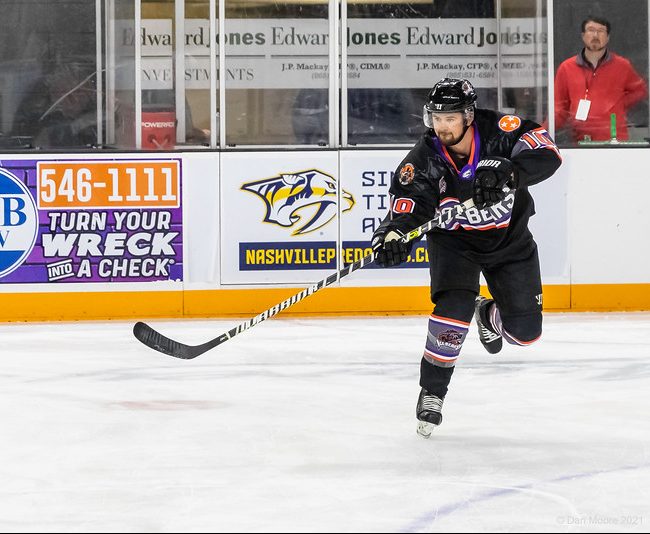 The Southern Professional Hockey League has announced Knoxville center Anthony McVeigh as the SPHL Player of the Week. McVeigh scored five goals and had three assists for an eight-point week in three games as the Ice Bears went 2-0-1 last week with all three games being played on the road.

McVeigh opened the week with a three-point night against Huntsville on Wednesday. He scored a shorthanded goal to open the second period before adding two assists in Knoxville’s shootout loss to the Havoc.

He followed that performance up with a goal and an assist in Knoxville’s win over Evansville on Friday. McVeigh scored on a redirect in the first period before assisting on Andrew Bellant’s game-winning goal in the third period as the Ice Bears beat the Thunderbolts 4-1.

“It’s been a solid week. Honestly, my line’s just really clicking right now,” McVeigh said before Saturday’s win in Macon. “Playing with Bellant and Dino [Balsamo] has been really good and they’re really good forwards. They’ve been creating opportunities for me to score. I think, as a line, we’re playing really well right now.”

McVeigh then scored his first career hat trick against the Mayhem. He scored once in each period. He landed a wrist shot in the first period, scored from in front of the crease in the second and redirected a Kyler Matthews shot from the point in the third to put the exclamation point on Knoxville’s 9-0 win Saturday night. The third goal was also his 100th career point in the SPHL.

The Kemptville, Ont. native is in his fourth season playing for the Ice Bears. In ten games this season, he has four goals and six assists for ten points.

The Ice Bears next face the Vermilion County Bobcats in a home-and-home series this weekend. The two teams will play at the Knoxville Civic Coliseum Friday night before heading up to Danville on Saturday.