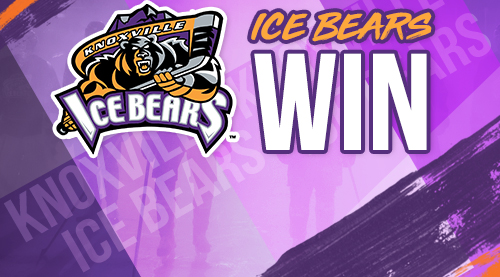 Joseph Murdaca made 33 saves for his second consecutive shutout and the Knoxville Ice Bears beat the Pensacola Ice Flyers for their fourth straight win. Knoxville is 6-0-1 in its last seven games. The loss snaps a four-game streak for Pensacola.

At the end of a scoreless first period, Tanner Froese was called for holding, putting Knoxville on the power play to begin the second period. Jason Price took the puck through the neutral zone, skated into the high slot and fired a wrist shot over the blocker of Chase Perry to put the Ice Bears ahead just 18 seconds into the frame.

Pensacola nearly tied the game with a two-man breakaway, but Murdaca stretched out his right pad to deny Garrett Milan. The Ice Flyers almost tied it again late in the second, but Matt Ustaski’s shot from the left circle hit the post and sat in front of the net before Price cleared it out of the crease.

With Knoxville shorthanded, Bryce Nielsen took a loose puck up the right-wing and lifted a shot over Perry’s shoulder to give the Ice Bears a 2-0 lead 54 seconds into the third period. Brady Fleurent added an empty-net goal at 19:26 to conclude the scoring. Perry finished with 13 saves. The Ice Bears were outshot 33-16.

The two teams will play again Saturday night at the Coliseum.

ABOUT The Knoxville Ice Bears: The Knoxville Ice Bears organization began in 2002 and was an inaugural charter member of the Southern Professional Hockey League (SPHL) in 2004. As four-time SPHL Champions, the Ice Bears are an experienced and established organization,  offering the city and its’ visitors a balanced product of highlight-reel hockey, unique and exciting intermission activity and endless fan interaction, presenting the most affordable, family-friendly way to enjoy sports and entertainment. Season, Partial Season and Flex Tickets are now on sale. For more information, visit www.knoxvilleicebears.com or call (865) 525-7825.