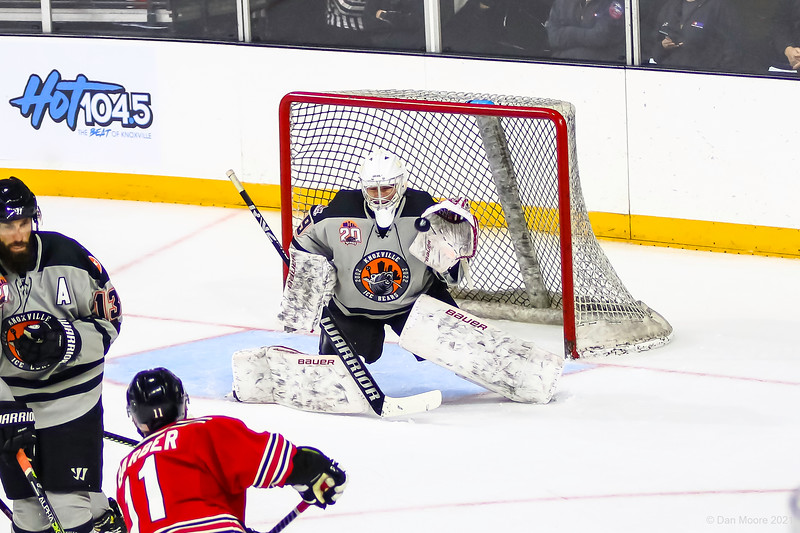 Jimmy Poreda made 30 saves for his fourth win of the season and the Knoxville Ice Bears held off the Fayetteville Marksmen 3-1 at Crown Coliseum in North Carolina Saturday night.

The Ice Bears (5-1-0) have now won two straight. The Marksmen (4-2-0) have lost their last two after winning their first four games to start the season.

Razmuz Waxin-Engback scored his first goal as an Ice Bear with a quick shot in front of the crease after Stepan Timofeyev delivered the puck from the opposite end line. Waxin-Engback beat Stefano Durante to the near post to make it 1-0 Ice Bears at 4:22 of the first. It was the first time Knoxville scored in the opening period this season.

The Ice Bears extended their lead on the power play when Anthony McVeigh scored at 14:30 of the second. Andrew Bellant skated behind the defense through the left circle and made a backhanded pass across the slot where McVeigh buried it for his first goal of the season.

Fayetteville cut the deficit in half late in the second when Taylor Best made a falling backhanded shot from the right circle that slipped by Poreda’s left pad at 18:26. The Marksmen had three power play chances in the third period to tie the game, but Poreda maintained Knoxville’s lead with save after save, including on a short rebound chance with 14:30 remaining. Fayetteville finished 0-for-5 on the power play. Knoxville was 1-of-6.

J.B. Baker scored a long empty-net goal with two seconds left to round out the scoring.

The two teams will play for the third time in three days at Crown Coliseum Sunday afternoon at 3 p.m.