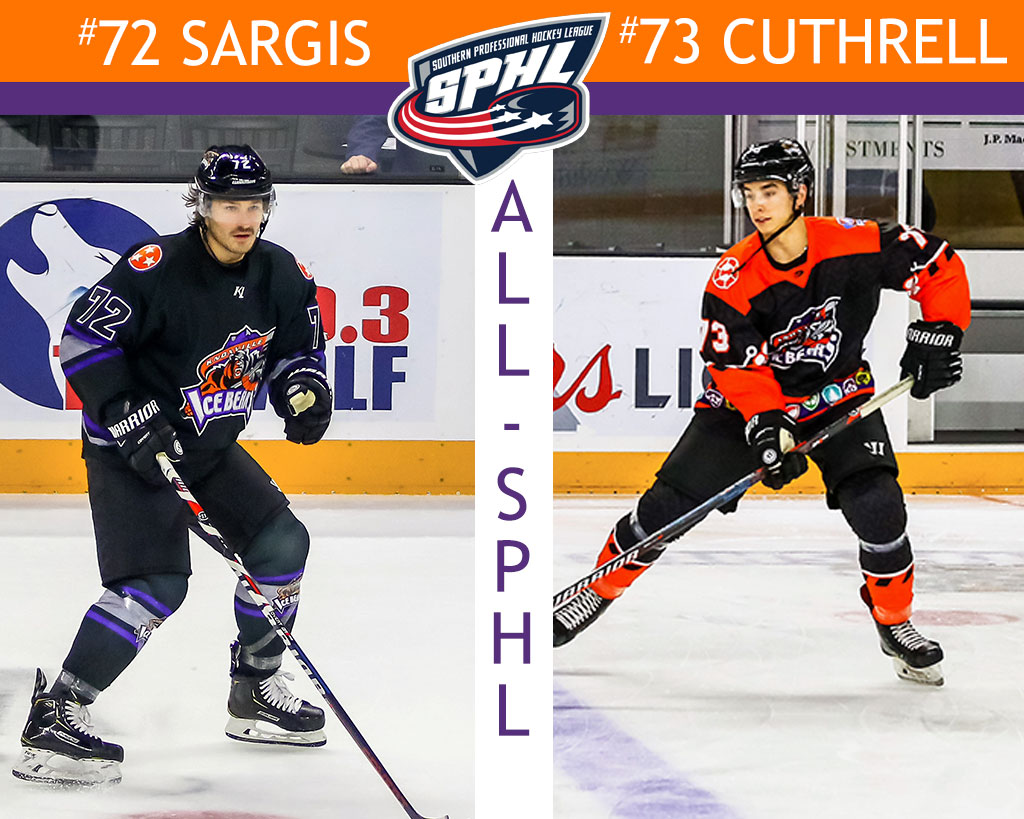 HUNTERSVILLE, NC (April 10, 2020) – The Southern Professional Hockey League on Friday announced its All-SPHL First and Second Teams as selected by a vote of SPHL coaches, broadcasters and media representatives.

Austin Plevy of the Evansville Thunderbolts led the SPHL in scoring, finishing the abbreviated season with 65 points in 45 games. Plevy also ranked first in as- sists (48) and power play assists (21), led all rookies with 17 goals and had two of the top five scoring streaks, including a league-best 17-game run.

Brian Bowen of the Fayetteville Marksmen led the SPHL with 30 goals in 46 games, while finishing second in the scoring race with 58 points. Bowen also ranked second in game-winning goals (five), plus-minus (+27) and shots on goal (199).

Alec Hagaman of the Peoria Rivermen ranked second in the SPHL with 23 goals, third in penalty minutes (114) and fourth in points (52) and plus-minus rating (+24). Hagaman also recorded an eight-game goal-scoring streak, second-longest in the SPHL this season.

Nick Neville of the Peoria Rivermen led all defensemen in points (35), assists (29) and power-play assists (13) while ranking second among blueliners with a

+21 rating. Neville’s 13 assists with the man advantage were also tied for second-most among all SPHL players.

Matt Fuller of the Birmingham Bulls topped defensemen with five power-play tallies while ranking second with 11 goals and 109 shots on goal. Fuller’s 24 points from the blue line were also third-most by a defenseman.

Max Cook of the Fayetteville Marksmen finished the season with 38 assists, second-best in the SPHL, and 53 points, which ranked third. Cook’s 11 power-play assists also tied him for the team lead.

Scott Cuthrell of the Knoxville Ice Bears tied for second in the SPHL in power-play assists (13), was third in assists (32) and fifth in points (50). Cuthrell also had an 11-game assist streak, the league’s longest this season.

Garrett Milan of the Pensacola Ice Flyers registered 17 goals and 23 assists in 38 games, one of seven players to average more than a point a game for the season. Milan also ranked fifth in shots on goal (179).

Travis Armstrong of the Roanoke Rail Yard Dawgs ranked fifth among SPHL defensemen with 22 points while his 106 penalty minutes were third-most among blueliners.

Gehrett Sargis of the Knoxville Ice Bears set a new SPHL record for goals by a defenseman with 20. Sargis also ranked second among blueliners in points (32) and game-winning goals (three) and was fourth in shots on goal (107).

Saverio Posa of the Huntsville Havoc ranked seventh in the SPHL in scoring from the blue line with 20 points.

Max Milosek of the Huntsville Havoc tied for the league-lead in wins (22) and shutouts (four) and was first overall in minutes (1960:40). Milosek also ranked second in goals-against average (2.26) and saves (838) while his 0.919 save percentage was fourth-best in the SPHL.

The league will announce its Defenseman of the Year on Monday.