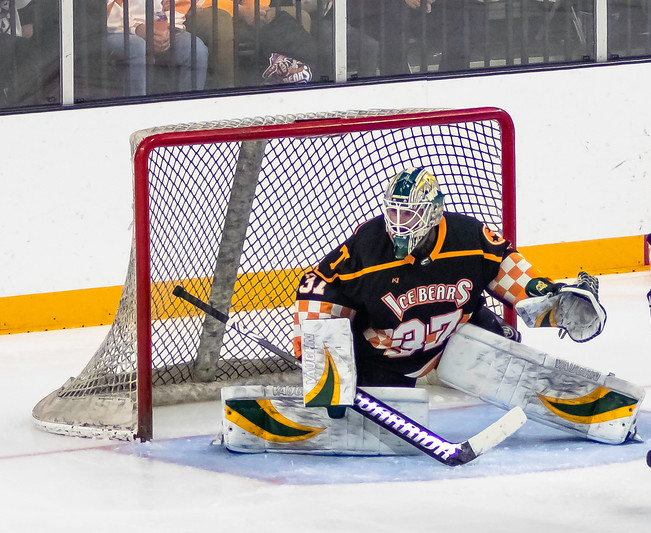 Kristian Stead made 29 saves for his second shutout of the season and the Knoxville Ice Bears used a big second period to defeat the Fayetteville Marksmen 3-0 Sunday night at Crown Coliseum in North Carolina.

With the game scoreless in the first period, Stead denied a Fayetteville breakaway after a turnover in the neutral zone six minutes into the game. The rookie made another big stop with 2:20 left in the first when Bryan Moore skated through the left circle and glided across the crease, but Stead slid across to stop Moore’s backhand.

Steven Leonard swatted a bouncing puck past Jason Pawloski at 10:35 of the first, but the goal was waived off due to the puck being played with a high stick and the first period ended with no score.

Dino Balsamo scored on a redirect to put Knoxville on the board first at 4:01 of the second. Jason Price had a shot from the left circle blocked, but he regained possession of the puck and found J.B. Baker in the right circle. Baker sent the puck towards Balsamo in front of the crease, who turned it past Pawloski for his seventh goal of the season.

After Donald Olivieri was ejected from the game for an elbowing major, Stepan Timofeyev scored on the power play to make it 2-0 at 7:37. Timofeyev skated with the puck through the left circle and split Pawloski’s pads with a wrist shot.

Stead made another herculean effort midway through the second when Bryan Moore broke loose for a two-on-one. Moore skated around a defenseman and put a backhand on net as he was crossing the slot. Stead slid and stopped the initial attempt with the left pad and snagged Moore’s follow up try with the glove at 10:52 of the second.

Just a couple of the many big-time saves made by Kristian Stead tonight. pic.twitter.com/HwVyUJhgBH

Baker scored off a give-and-go with Jared Nash to make it 3-0. Baker worked the puck into the high slot and passed it to Nash in the right circle, who tapped it back to Baker between the hashes. Baker’s one-timer beat Pawloski five-hole at 12:50.

Stead moves to 4-0 on the season with the win. Pawloski takes just his fourth loss of the season and made 28 saves for Fayetteville.

Knoxville continues a four-game road stretch against Peoria next Friday and Saturday. Fayetteville is off until December 16 when it heads to Macon.