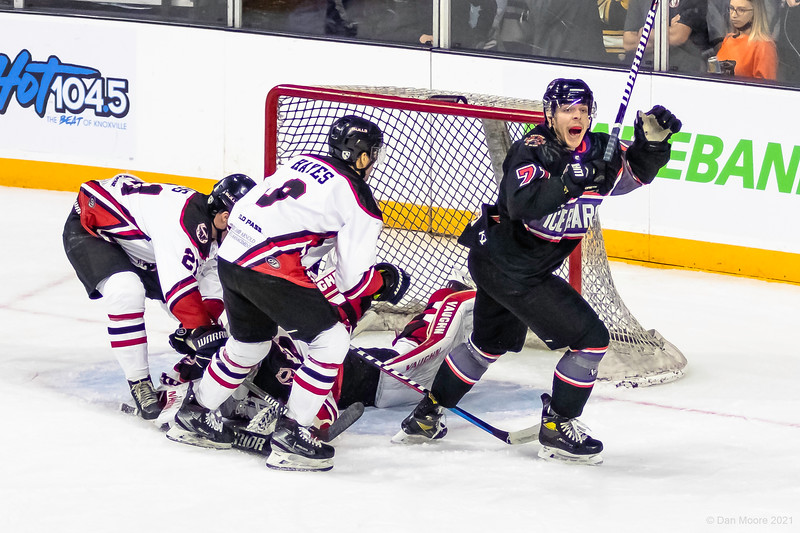 Knoxville opened the scoring when Stefan Brucato fired a wrist shot from the left side over Hayden Stewart at 1:40 of the first. It was Brucato’s tenth goal of the season.

After simultaneous penalties on Colton Fletcher and Steven Leonard, Carson Rose scored for Birmingham at 10:08 on the 5-on-3. Rose received the puck in the left circle from Jake Cass, skated through the circle and lifted the puck over the right shoulder of Jimmy Poreda.

The Ice Bears retook the lead in the final minute of the period when J.B. Baker slipped the puck through the right circle to Brucato, who managed to find Waxin-Engback right in front of the net. Waxin-Engback poked the puck past Stewart with 52 seconds remaining to make it 2-1.

Scott Donahue scored off a rebound 46 seconds into the second to tie the game for Birmingham.

Andrew Bellant scored on a shorthanded breakaway to push Knoxville back in front. Bellant carried the puck into the zone, got behind the defense and slipped the puck past Stewart as he went from left to right in front of the crease at 7:17. Rose scored on another 5-on-3 less than two minutes later to knot the score at 3-3.

Waxin-Engback scored on the power play at 14:52 to put Knoxville ahead again. Stepan Timofeyev fed the puck from the left end line to Waxin-Engback in the slot. Waxin-Engback quickly put the puck on net for his to make it 4-3. Bellant followed up with his second of the night from the slot to make it 5-3.

In the final minute of the second, Rose emerged from behind the net with the puck in the left circle and let loose a shot. He was hit from the side by Bellant, causing Rose to stay down on the ice for several moments. Frank Sullivan came off the bench to fight Bellant and both players were sent to the dressing room. Bellant was given a match penalty for an illegal check to the head. Sullivan received a pair of game misconducts for leaving the bench and acting as the aggressor in a fight.

Waxin-Engback completed the hat trick at 5:53 of the third on the power play with a backhand right in front of the net. Dino Balsamo found Waxin-Engback from the right circle to the left. Waxin-Engback skated in tight and lifted the backhanded shot over Stewart. Waxin-Engback is the third Ice Bear to record a hat trick this year, joining Balsamo and Anthony McVeigh.

Mike Davis scored on a redirect in front of the crease for Birmingham at 10:19 to cap off the scoring.

Poreda finished with 32 saves to collect his ninth win of the season. Stewart made 27 stops for Birmingham.

The Ice Bears will have Saturday off before heading to Fayetteville on Sunday. Birmingham heads to Evansville Saturday night to take on the Thunderbolts at the Ford Center.